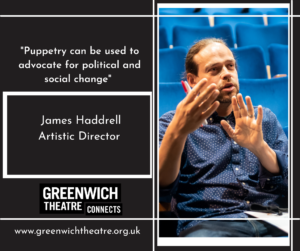 “…Puppetry does not have to be used on such a grand scale to address political issues…”  says James Haddrell, Greenwich Theatre Artistic Director.

James adds,  “At the Little Angel Theatre in Islington, There’s a Rang-Tan in My Bedroom and Other Stories has been inspired by two Greenpeace campaign films, the first of which became an internet sensation in 2018 when supermarket chain Iceland was banned from using it as their Christmas television ad.

With online views now exceeding 30 million the short animated film, based on the poem by James Sellick, is voiced by Emma Thompson and was produced to raise awareness of the deforestation brought about by the palm oil industry.

The beautiful adaptation at the Little Angel, which is currently playing to packed houses, encourages children to understand the issues involved, with Doc Brown and Rag ‘n’ Bone Man joining Emma Thompson in providing narration.

Alongside the show, the theatre is also releasing a seven-episode weekly digital video series called Bertie! aimed at ages five-11 and addressing landfill, alongside a detailed scheme of work for schools to download.

While Good Chance’s Amal and the Little Angel’s Rang-Tan could not be more different, both offer a glimpse of just how powerfully puppetry can be used to advocate for political and social change.

For anyone with children and a desire to see them politically engaged and committed to improving the world around them, a trip to the Little Angel before the show closes on November 7 is a must.” 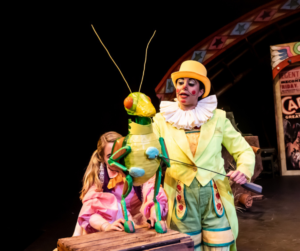 Greenwich Theatre has had it’s own productions featuring puppetry.

Read the full feature in the London News online here.

See What’s On at Greenwich here.