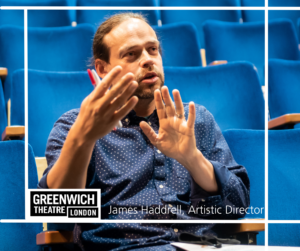 In theatre we are always looking for the next exciting storyteller and the next inspirational tale, but they don’t always appear where you would expect – so when I was approached by Hugh Salmon, known for having established a major name for himself in advertising, I was immediately intrigued.

Hugh didn’t only work in advertising. He was nominated in the Campaign Magazine’s A-List of ‘Who’s Who in Media, Marketing and Advertising’.

However following issues caused by a fractured spine he dissolved his agency and began writing again, blogging on social issues on Huffington Post which soon combined into two books.

The play that Hugh approached me with – his first – unearths a true story that has remained buried for over 100 years.

Titled ‘Into Battle’, the play tells the true story of the emergence of dangerous rifts between the upper and lower classes at Balliol College, Oxford, in 1910, and the so-called ‘Balliol Feud’.On one side were war poets the Hon. Julian Grenfell and Patrick Shaw Stewart, and Julian’s brother the Hon.

On the other were the socially conscious and home-educated Keith Rae, who established the Balliol Boys’ Club to help impoverished boys from the underprivileged areas of Oxford, and his friend the rugby international and former captain of the England rugby team Ronald Poulton-Palmer.

At Balliol they were pitted against each other in a bitter rivalry, but just 4 years later they would be called up together to fight in the First World War, with Grenfell and Rae fighting alongside each other in the same regiment.

Could the presence of such a powerful common enemy bring them together despite their fierce ideological differences?

“What compelled me to write the play” Hugh told me, “was the human journey these remarkable people take from one point in their lives to another. And that the issues that divided them were not only reflected at a national level, against the background of one of the most divisive general elections in history in 1910, but that these issues still resonate over 100 years later: specifically, the inequality and unfairness that is still prevalent in today’s society.

…The more I researched the Balliol Feud, and the people involved, the more I realised that I was uncovering and piecing together a story that has been buried in history but that I could bring back to life for today’s audiences…” Hugh Salmon

These individual real life characters are so wildly full, interesting and engaging that I wanted to share their journeys and let their voices be heard by a new generation. Whatever our differences, we can come together.”

Book Tickets for Into Battle: www.greenwichtheatre.org.uk