There are some general misconceptions about theatre productions and the ease in which they’re delivered. In many ways this is a good thing, because if we as audiences can engage in seamless stories told on stage, then theatre practitioners are doing their job well.

It is enticing though, to get some insights into how the magic is woven together, a drawing back of the curtain if you like, that helps us appreciate the talent, skill and dedication of actors and crew performing at their best.

To this end Greenwich Theatre presents a series of conversations with theatre practitioners, where they invite us into their work and their passions as part of their work in theatre.

We’re very excited to find ourselves in ‘that time of the year’, as we as a nation and industry try to find a ‘new normal’ out of Covid19, the pandemic and subsequent lockdowns. ‘That time of the year’ of course is panto season and this year, we revert to tradition to bring a production of The Queen of Hearts. 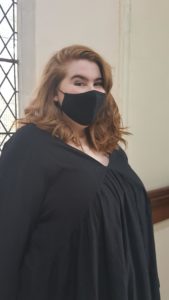 Out of busy, but exciting rehearsals, we spoke with Bill Willden who is the Company Stage Manager on The Queen Of Hearts. Bill took time out to speak with us about Bill’s career and passion for theatre.

Bill’s first taste of theatre didn’t go as expected, it wasn’t a deliberate process of study, then practice.

“Well, it’s a bit of a spicy story. I went to a really nice school, but I didn’t like academia so much, they didn’t know what to do with me. They had a theatre department that no one utilized, so I got sent there as a punishment because I wouldn’t take any other punishment! It turns out that, that’s what I needed all along. As soon as they sent me there, it became everything to me. I went on to college and did it (studied theatre) and then I went to uni and did it and I’ve been doing it ever since.”

Speaking on Bill’s current working circumstance and future, Bill says, “Now I’ve come full circle where I’ll leave working here and go on (to work) in accessibility administration. It’s something I’m really passionate about. I really want some other neuro divergent child like I was to have the possibilities that I had (in theatre) but on purpose – not as a punishment!”

Bill went on to share a little more about some of the best things about theatre;

“I think it’s just joy. Theatre is one of the few places, like music, the arts, that really penetrates the masses in joy. It really makes the culture happy, it brings people together quite a lot.”

Click here to buy tickets for The Queen Of Hearts panto

Read: Guide to supporting neurodiversity in the arts to be launched, The Stage