The intricacies of set design become clear when looking at the images that Theatre Designer and Artist, Cleo Pettitt has crafted. Cleo is working on the costuming for The Queen Of Hearts and has worked on previous pantomimes with Greenwich Theatre. The drawings she’s created are detailed and explain exactly to the other designers working with her, how the costumes will come to life.

Rehearsals are well under way for our pantomime and we took time out of Cleo’s busy schedule to get a quick heads-up from her. 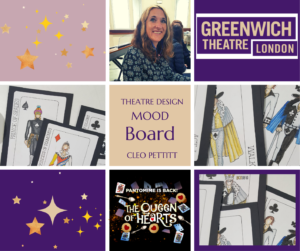 “I trained in Theatre Design. I did a degree and  a masters – that’s how seriously I take panto!”, she joked.

Cleo began to tell us about the challenges of her role as Set Designer at Greenwich.  She stated that  difficulties are with “…all the different locations you go to in panto and making it all work in the spaces you have.”

She went on, “There’s limited space in Greenwich. We’re trying to do traditional scenery with little wing-space. We’re having things (stage props, set design, costumes) slotted in so carefully and stored so carefully (in very small spaces). You’re trying to make the set look massive and  amazing in a minimal space.”

There are many, but what are some of the best things about panto for Cleo? “Glitter!” (environmentally friendly glitter we hope)

So, how would Cleo advise would-be theatre enthusiast into getting into a role such as hers…is there a traditional route or not-so traditional route?  Cleo said “There are lots of routes, but how I got into it originally, I’d just got involved, that’s how I started. You could do art or volunteering, or shadow someone. Just go along to your local theatre and ask , ‘can I help or do anything’ ”

Get to know Cleo Pettitt

Buy tickets for The Queen Of Hearts

We’d love to see your own stories on social media over the coming festive time.  Especially if you come to our panto, The Queen of Hearts (Oh yes you will!),  why not share with us using the following hashtag: #GreenwichHearts21